It’s been just about 40 years since Tim Hauser, a former Madison Avenue marketing executive, paid his bills by driving a New York City cab while aspiring to form a harmony vocal quartet sui generis that could authentically embrace varied musical styles, and still create something wholly unique in the field of American popular song. In the fall of 1972, Hauser met Laurel Masse, Janis Siegel, and Alan Paul in fairly quick succession, and the rest, as they say, is history. In 1974, The Manhattan Transfer began performing regularly throughout New York City at Trude Hellers, Mercer Arts Center, Max’s Kansas City, Club 82, and other cutting-edge cabaret venues. By the end of the year, the group was the top live attraction in New York City. Quickly signed to Atlantic records, the quartet released its self-titled debut in 1975, which spawned the group’s first national hit, “Operator.” The band’s next two albums, Coming Out (1976) and Pastiche (1977), produced a string of Top 10 hits in Europe, including “Chanson d’Amour,” a No. 1 smash in Britain and France.

In 1978, Masse was injured in a car accident and during her convalescence, decided not to rejoin the group that had since moved to California. One of many who auditioned for her slot was Cheryl Bentyne. At her dazzling audition, the other Transfer members immediately felt her impact, invited her to join, and, as Paul puts it, “The Transfer’s second phase began.” The first album featuring the now-legendary quartet of Hauser, Siegel, Paul, and Bentyne was 1979′s Extensions, which earned the band another smash hit with “Twilight Zone/Twilight Tone.” The group went from strength to strength, garnering numerous Grammy Awards and nominations throughout the ’80s, including a monumental 12 nominations for the 1985 album Vocalese.

In the ’90s, The Manhattan Transfer’s restless creative energy found the group writing more original material (1991′s The Offbeat of Avenues), and tackling seasonal standards, children’s music (1994′s The Manhattan Transfer Meets Tubby The Tuba), popular music from the ’50s and ’60s (1995′s Tonin’), and, foreshadowing the success of Dancing With The Stars, different genres of swing music (1997′s Swing). The ambitious quartet has kept its pace of excellent and often groundbreaking releases well into the new millenium, with albums like The Spirit of St. Louis (2000), the live album Couldn’t Be Hotter (2003), Vibrate (2004), The Symphony Sessions (2006), and The Chick Corea Songbook (2009). The group is currently working on a special project called The Vaults to commemorate its 40 years of incredible vocal jazz. 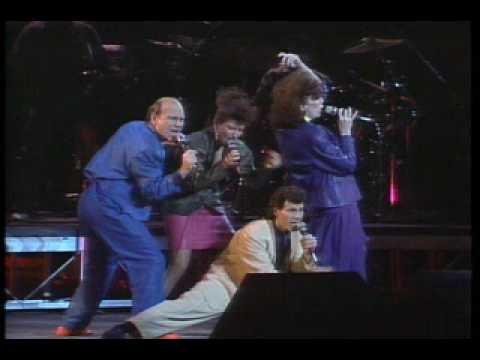